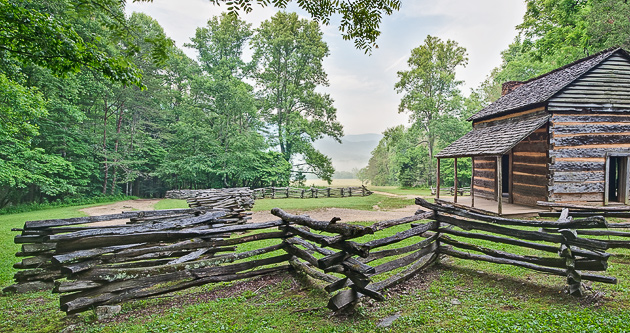 In the days before barbed wire, the traditional fencing material in the Smoky Mountains was rails split from a rot-resistant hardwood such as chestnut or yellow locust. The fence above at John Olivers place in Cades Cove is known as a snake, worm, or zig-zag.  Sometimes the rails were just stacked up in zig-zag fashion, and sometimes there was a corner post added for stability, as in the picture below from the Mountain Farm Museum.

Another common variation of the split rail fence is post and rail fence, which was built in a way that allowed a straight line.

The Smoky Mountains pioneers also created stone fences, similar to the ones that are so common in New England. It is likely that stone fences were made when clearing areas that were very rocky, such as along the Roaring Fork pictured below.

Eventually, in the later 1800s, barbed wire became available, although it had to be bought rather than simply using native materials. The fence below is in Cades Cove.

The William Britten Gallery on Glades Rd in Gatlinburg features full display of Smoky Mountain photos. Please stop and visit during your next trip to the Smokies!

← Miles Away on Monday: Last of the Snow?
Wordless Wednesday: Winter Road →