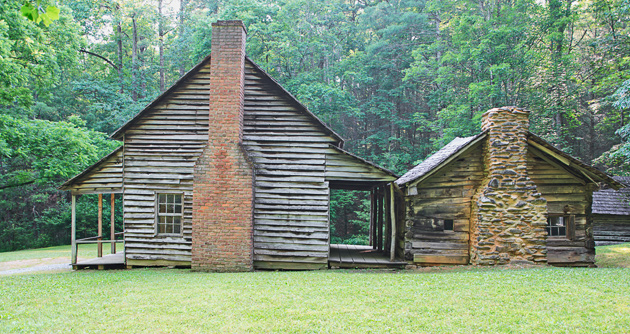 Matilda “Aunt Tildy” Shields married Henry Whitehead after her first husband ran off. Henry built the house pictured above in the Chestnut Flats area of Cades Cove in 1895. Notice the brick chimney! This structure might be called the ultimate log cabin, or sometime called a “transition house” due to its near-perfect construction from logs sawed straight and flat at a nearby mill. Soon the mill-sawed lumber would replace log cabins with frame construction.

Look more closely, and you will see that behind the grand transition cabin sits a much more crude and smaller cabin of logs with a stone rubble chimney. Matilda’s brothers quickly built this cabin when her husband deserted her, and before Henry Whitehead courted and married her, and built her Smoky Mountains dream home.

Please stop in and visit me to see the complete display of Smoky Mountains Photos at the William Britten Gallery in Gatlinburg, TN. I’m located in Morning Mist Village, along the historic Arts and Crafts loop on Glades Rd.