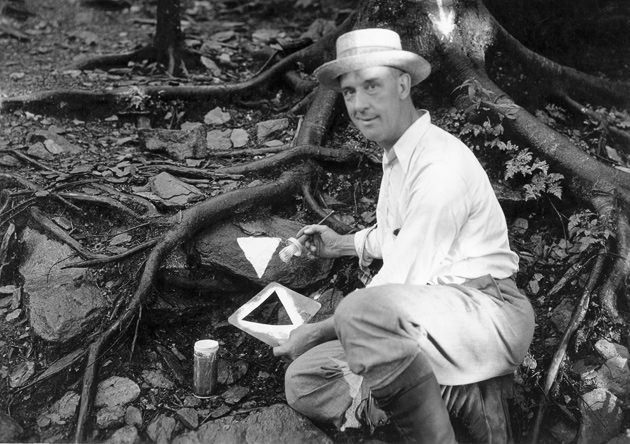 Jim Thompson was a founding member of the Smoky Mountains Hiking Club and a prominent Knoxville photographer during the 1920s to 1940s. Along with his friend and fellow hiker, Dutch Roth, Thompson created a large body of images from the early days of the Great Smoky Mountains National Park. I will be posting images from both of these early Smokies photographers from time to time.

As a member of the Knoxville business community that was supporting and promoting the formation of a National Park in the Great Smoky Mountains, Jim Thompson appeared with many of the dignitaries that were instrumental in the final creation of the Park as we know it today.

If you take a look at the photograph on this posting about Dutch Roth, you will notice that the two pictures are very similar. It looks like the two friends were hamming it up just a bit!

The picture below was taken during a Smoky Mountains Hiking Club outing to the primitive lodge on the top of Mt. LeConte.  Jim Thompson is standing at the left of the picture, and Dutch Roth is lying in a bunk to the right.

Both images used with permission of The Great Smoky Mountains Regional Collection, University of Tennessee Libraries