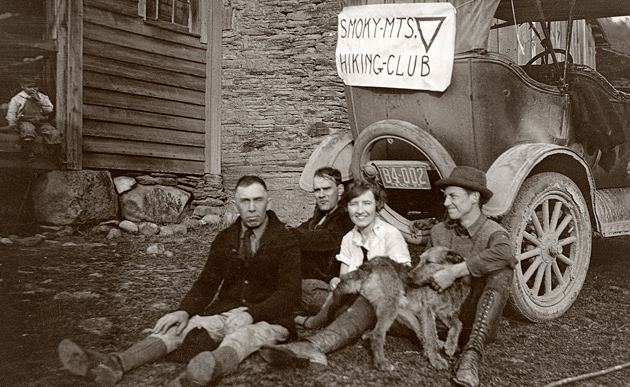 The Smoky Mountains Hiking Club cabin still stands in the Greenbrier section of the Great Smoky Mountains National Park. You can see it by taking the Porters Creek Trail. In 1935 Dutch Roth helped build the cabin. These are his photographs. Below are some excerpts from his journal, titled Tales from the Woods, about the time the Hiking Club built their cabin in the Greenbrier.

“In 1934 the national Park Service gave the Smoky Hountains Hiking Club the right to build a cabin for their members. This was a tract of land located in the Greenbrier section about 12 miles East of Gatlinburg. On this land was a barn and an old cabin, the latter being torn down to make way for the new cabin that the club built themselves, from logs taken from three other old cabins above there. The old barn still stands, and so does the springhouse. There is a good spring here where you can get water for cooking and to drink. The old cabin that was there was torn down, but the chimney built in 1888 was left and the cabin built on other side of it. I helped repair the chimney, with a few new stones and concrete.”

“The club members had work trips up there nearly every Sunday for a while, till they got the cabin built. It is made entirely out of logs with hardwood floors. The chimney with a fireplace on each side stands between the two rooms. The upper cabin has a porch across the front, while the lower cabin had only a stoop. A little way in front of the cabin, across from the springhouse, is the cookshed. It is made of a roof over a stone cook stove and has a table and two benches.”

“Before we got the cabin finished we used to go there for weekends and sleep in the loft of the old barn. Now we have bunks in the cabins. A lot of hard work went into the building of this cabin. Each member had his job to do. My job was to concrete the terrice in front of the upper cabin and work on the fireplaces and to build the stove in the cook out. The stove is built like an old cookstove with the cover and eyes on top, only the sides are made of concrete and stone, We have to remember to put everything in the garbage pit because of the bears. They would tear the stove up if there was any food left in it.”

“We had so much trouble with bears that it was hard to keep food in the springhouse. They would tear the door down trying to get to it. So I had a big iron box made so that we could lock it up. The bottom part of the box was heavy wire, so that we could sit it down in the springhouse and the food would keep cold. Any member of the club could use the cabin for vacations or week-ends. Every Spring and in the Fall there is a work trip there to get the cabin and grounds all cleaned up. The cabins are kept locked at all times. We have had some trouble with fishermen and outsiders leaving trash around and getting into things or trying to brake in.”