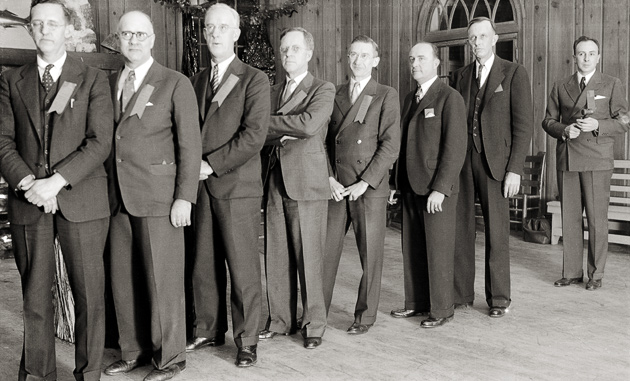 The first eight Presidents of the Smoky Mountains Hiking Club gathered in December of 1936 and posed for a photo by Dutch Roth. From left to right, and in order of their Presidencies, they are: George Barber, Brockway Crouch, James Thompson, Dr. H. M. Jennison, Harvey Broome, Guy Frizzell, Henry R. Duncan, and Marshall A. Wilson.

The club was formed in October of 1924, and according to Dutch Roth from his journal, Tales From the Woods,  Harvey Broome provided this humorous tongue-in-cheek account of the group:

“It all come about in ’24. There wuz talk about a park, and the road wuz opened to the ‘Burg—there was more folks a hikin’ and more a lyin’ and a yarnin’ and fewer to lissen, so they jes natcherly had to organize. Not to hike, but to lissen.

“As you might uv guessed, hit took place on LeConte. There’s more lies been born around LeConte than clouds. Ev’body’s heard about the big freeze up there when the trees popped open; and about them “balsam pertaters” of Wiley Oakley’s. Well, hit wuz a fittin place to organize.

“George Barber, as you might uv guessed, wuz elected First Liar—I mean, President. Jim Thompson ran him a close second and Brock Crouch would uv been in the runnin’ ef he hadn’t been so fleshy. Brock qualified later, atter that yarn come out about him losin’t three tires between Sevierville and Knoxville, an’ comin’ on in on his rims.”