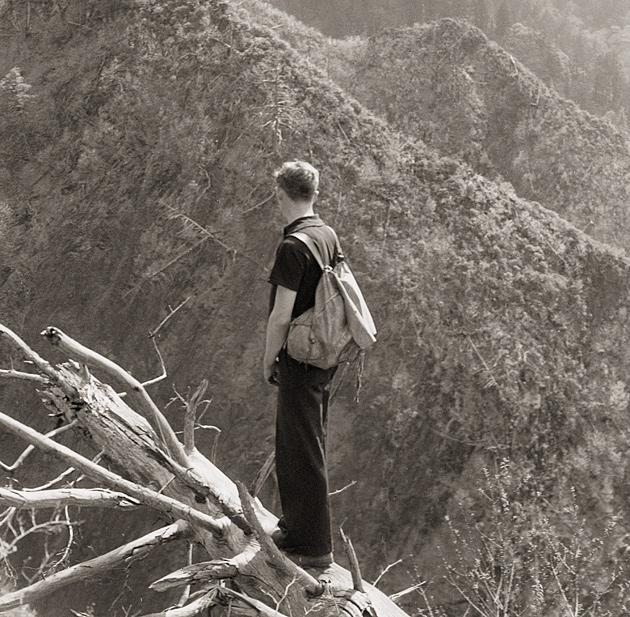 “We will fight to preserve the status quo in the Greenbrier. May the Greenbrier remain ax-less, pathless, and roadless, as an act of contrition for Little River, Charlies Bunion, Forney Ridge, and Big Creek.”

Harvey Broome spoke these impassioned words in 1944, in his book, Out Under the Sky of the Great Smokies. In the picture above, Broome stands near Charlies Bunion in 1937, absorbing the utter destruction of his beloved Smoky Mountains due to logging.

Harvey Broome lived from 1902 to 1968.  He was one of a handful of early conservationists, becoming a founding member of the Wilderness Society in 1934. As a lawyer he worked tirelessly to help create the National Wilderness Preservation System, which occurred in 1964 when Congress passed the Wilderness Act.  Broome was present among other conservationists when President Lyndon Johnson signed the bill.

Harvey Broome was a friend and fellow hiker of Dutch Roth and Jim Thompson, and so appears in several of their photographs that will appear from time to time in this blog.

← Miles Away on Monday: the Sweep of Downy Flake
More Cold Water Under the Bridge →