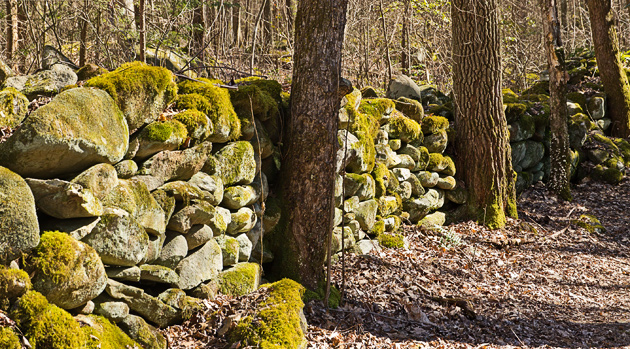 I’d like to do some off-the-beaten-path exploring in search of the history of the Greenbrier this spring. One of the best areas to start is up False Gap because you’re hemmed in with the creek on one side and mountains on the other, giving you a nice valley to explore with not much chance of getting lost.  The entrance to this area is just over the first two bridges as you turn to head up to Ramsey Cascades Trail. Note the old road with a gate across it to your right.  Park and walk up the old road. You’ll soon pass the foundation stones of the old school. Eventually you’ll pass the old Greenbrier Cemetery, now called Plemmons.  Keep on going after the old road becomes a trail and you’ll find some fine rock walls and fallen chimneys.  The wall in the photo above is a good example of the remains of old homesteads. And the photo below shows the remains of the school. You can see a close-up of this area on the historic topo map in the area in the center of the map section around the word “Gate.”

Quoting from Dutch Roth’s journal, Tales from the Woods, he speaks of the Greenbrier area that was a bustling community of over 300 people with a school, hotel, store, and many homesteads:

GREENBRIER IN THE EARLY DAYS

“As we walked through the woods in the foothills of the mountains, we came across many old stone walls, ruins of old cabins, and flowers that had been planted years ago. This is the Greenbrier section. It is about 12 miles from Gatlinburg, Tennessee, to the south of Tenn Highway 73. all of it is now in the national park.

“We often stop here to take pictures and daydream by some of these old places. We could picture a little old lady, a widow, bringing her six children and coming across the Mountain from South Carolina in 1795 to settle here. What it must have been like in those days! The first white man built here in 1802. The hardships that they must have faced. We could even go back to the Civil War, when Col. Thomas had a company of Confederate soldiers in Gatlinburg. They would sneak over into Greenbrier and rob the bee hives for the honey. They would kill horses and flee up into the Sugarlands through Dry Sluice Gap and Alum Cave. Most of these were Indians. They would tan hides and make explosives.

“About a mile and a half beyond the end of the fire road on the trail to Mt. LeConte,is the remains of an old cabin, spring house and spring. This spring is called the Fittified Spring. It will be running full for about twenty minutes, then, suddenly it will stop and be almost dry for about the same length of time. The oldtimers said this was caused by an earthquake in 1924. This spring had been doing this ever since. The quake must have shaken some rocks loose underground to cause it to do this. In the last few years the roof of the old cabin here, has fallen in and trees and weeds has grown up around it. A large rattlesnake was killed here in front of the cabin in 1946. After a drink from the spring, we continued on down the trail, on the left nor very far down the trail is an old barn. Back of this barn is the remains of an old mill. Farther on down the trail on the right is the chimney of what is left of an old cabin.

“At the forks of the river, was a store, a Grist Mill and the old Schooich Lumber Co. The logs cause trouble here, because everyone wanted a profit. On the right across the river, on the road that goes up to the trails to Ramsey Falls and Greenbrier Pinnacle, was a school. In about two years it burned down. A cabin was built here and later an upstairs was added and a porch all the way around the first and second floors and it was turned into a hotel. They called it Greenbrier Hotel. There were twenty rooms in it. It has only been torn down in the last twenty years.”

When we’re done exploring and daydreaming of the old days, please stop in at the William Britten Gallery on Glades Rd in Gatlinburg. My complete display of Smoky Mountains scenes might tempt you with a special memory to take home.  Or just stop by to say hello.

6 Responses to Smoky Mountains History: Greenbrier in the Early Days