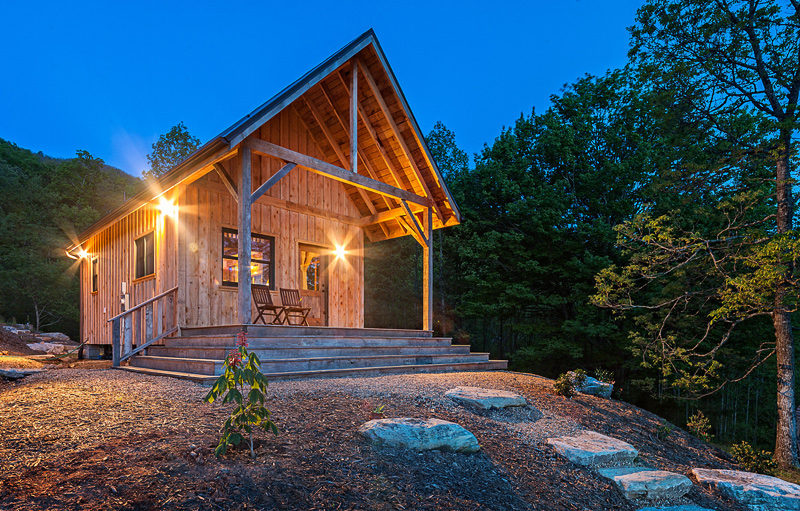 This blog has been inactive for several months. Where has the time gone? Well, most of it was taken up during construction of this wonderful little cabin in the Blue Ridge foothills of North Carolina. No, we are not leaving Gatlinburg, and the William Britten Gallery is still open along the historic Arts and Crafts Trail on Glades Rd. The cabin is a quiet getaway near children and grandchildren. Read on, if you’re interested in a Thoreau-style cabin and the lifestyle within.

The foothills directly behind the cabin are within the Pisgah National Forest, and if you were to set out walking, you would find yourself exploring miles and miles of uninhabited wilderness, much like in the Great Smoky Mountains. You could keep on walking all the way to the Blue Ridge Parkway. So, right from the start, we don’t have Thoreau’s Walden Pond, but we do have Pisgah.

A well was sunk 325 feet down into bedrock, and it greatly pleases me to think of this pure water flowing out of the undeveloped, pristine watershed. The cabin is less than 400 square feet of living space, plus a small loft area, and a generous porch overlooking the valley below. The cabin exterior is board-and-batten rough-sawn Hemlock, and the interior is all wood–some North Carolina harvested Hemlock, Oak, and Cypress, and some reclaimed from local barns. The exterior doors were made by a local craftsman, who also made the kitchen countertop from 2-inch thick Walnut found at a local sawmill.

Our little cabin is a riff on the Appalachian culture and its architecture. We tried hard to make it be as if it rose from the local woods. We were happy to find local craftsmen with the tradition of seat-of-the-pants resourcefulness. Hopefully it echoes the Appalachian traditions of small is beautiful, and richness in simplicity.

The cabin is very spartan … nothing more than a bed, a few chairs, and a table barely large enough for two dinner plates. It does have electricity and running water, but Internet access requires a walk down the hill to get within range of my daughter’s farmhouse. This is where Mr. Thoreau comes into the picture: at first I thought this would be a temporary situation, that we would finish off the cabin with furniture, a fully outfitted kitchen, some more decor, etc. But after three months of weekly getaways, I have no desire to move beyond the sense of raw simplicity that the cabin exudes. I stoke the wood stove with a few sticks to take the edge off the morning chill, sit in a straight-back chair and watch the light change, follow the moon setting through the branches of a Hickory tree. Later in the day, I’ll look forward to grandchildren’s knock at the door (chocolate milk in the fridge!). I read books. And of course, tromp around outside with a little hatchet in my hand.

No, I don’t need a microwave oven or a TV set. I don’t really need anything. Contentment comes in the form of observation, contemplation, appreciation.

A final observation: just above the front door, the grain in the wood appears to bless those who enter (photo below). It’s curious enough that the wood-grain carries this message, but to think of how it came to rest just above the door is miraculous. I asked the carpenters about it. Yes, they did take notice, but not until after the siding was nailed up.

I think of a large stack of hemlock drying in the wind. Hundreds of feet of lumber used over several months … cut this way and that … nailed up in various positions. And this special board came to rest in the perfect spot.

Click on any of the photos to bring up larger versions.

17 Responses to Little Bit of Thoreau