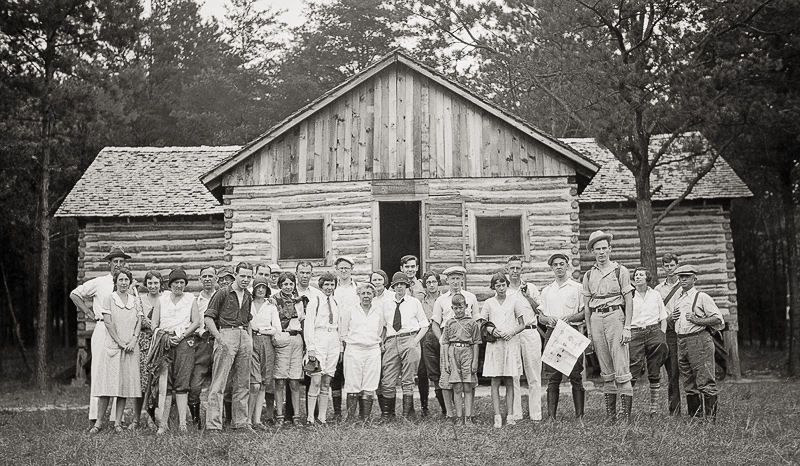 The photo above was taken by Dutch Roth on a trip with the Smoky Mountains Hiking Club. The group is shown in front of the John Oliver Lodge in Cades Cove.  Oliver was one of the last residents of Cades Cove to give up his land to the new National Park, fighting all the way to the Tennessee Supreme Court. Oliver finally quit his property on Christmas Day in 1937.

The photos below are also from Dutch Roth, taken years later on another trip to Abrams Falls.

From his journal, Tales from the Woods, Roth remembers another trip to John Oliver’s Lodge and Abrams Falls:

A NIGHT ON STRAW

We went to Cades Cove June 1,1929, and spent the night at the John Oliver Lodge and hiked to Abrams Falls the next day. We had a good time and had good food there at the lodge and slept on straw mattresses.

The falls are only three miles from John Oliver’s Lodge, so this is one of our short hikes. Although this trip can be made in a day, it is more fun to spend two days in the cove and enjoy its beauty.

We left Knoxville at 3 P.M. Saturday June 1, and drove via Maryville, Kinzel Springs, and on a winding road into Cades Cove and to John Oliver’s new Lodge. We arrived in time to see the sun getting low enough to cause the mountains to turn from green to blue, to purple. This is beautiful, looking across the cove. We came with enough food for three meals and did our own cooking, since Oliver’s Lodge is equipped with two cook stoves and cooking utensils. First one comes gets the use of the straw mattress bunks which are on each side of the rooms. There were two small rooms with several bunks and a large room with chairs, table, cook stoves, and the rest of the bunks.

I always got there early so that I could pick out the bunk that I wanted. Like Little Red Riding Hood, I tried them all out to see which one has the softest straw. Then,too, I like to get supper over early and my things put away, so that I can go out and sit on the front steps and let someone else use the stove and table. In the evening, we sat around in the big room of the lodge and sang. One by one you could see sleepy heads going off to their bunks or out to their tents or sleeping bags for those who wanted to camp out.

You can really sleep, it is so peaceful and quiet, with the only sound being the wind whistling in the pines and now and then a cowbell from a nearby field. The next day we all got up early and fried our bacon and eggs or whatever we brought for breakfast and packed our lunch and were ready to start hiking about 8:30 a.m.

The lodge was set in a pine thicket, and early in the morning with the sun rising through the mist and forming a silhouette of the pines and the birds singing it was really beautiful.